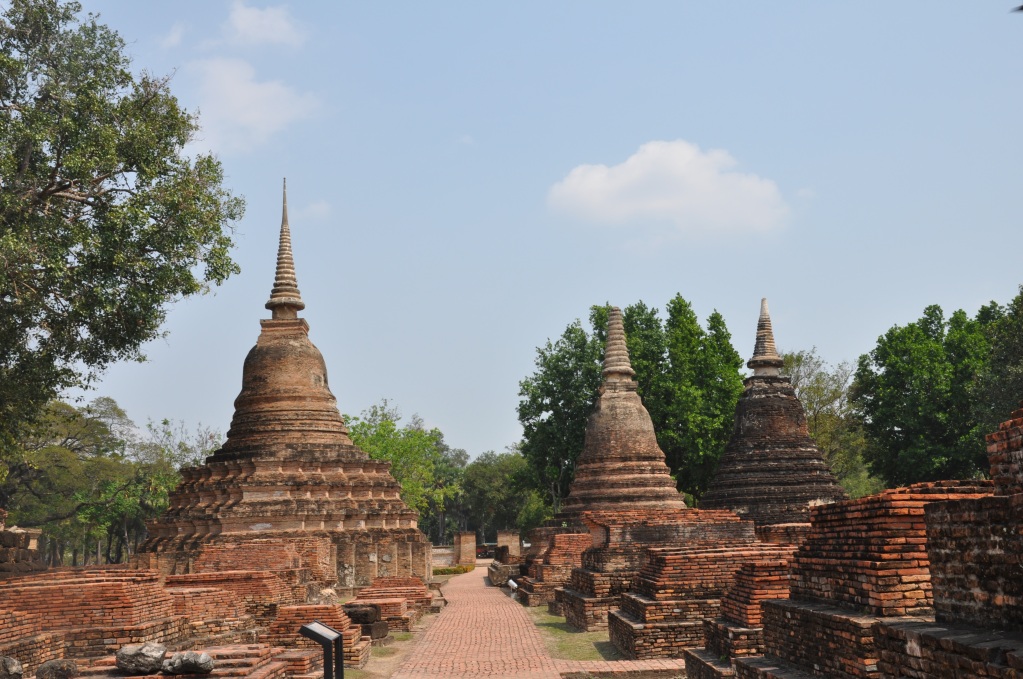 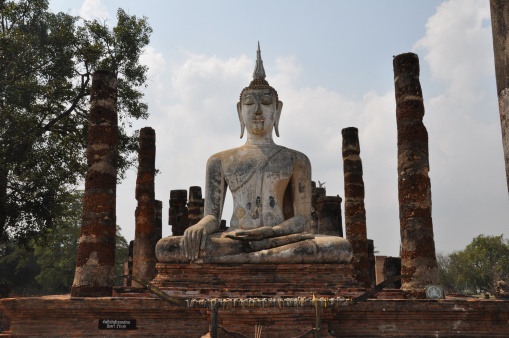 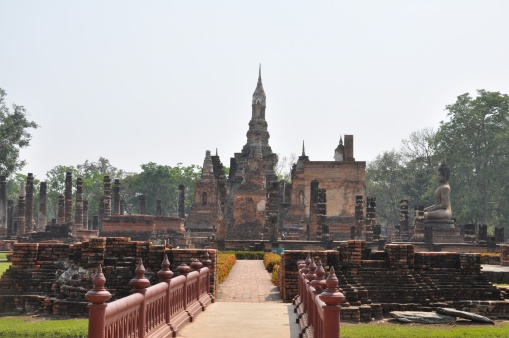 Old Sukhothai is located 12 km to the west of today’s Sukhothai and just over 300 kilometers from Chiang Mai. It is a long day trip or more easily done with an overnight stay.  This was the capital of the Sukhothai Kingdom from 1238 to 1438 and contains many ruins from that period. Its importance has been internationally recognised and it is now a UNESCO World Heritage Site. 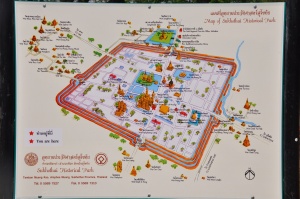 The best way to see the ruins in the Sukhothai National Historic Park is by bicycle. These can be rented from a shop opposite from the main park entrance. It is feasible to walk around the central and northern zones in 6 hours or so. There is also a 40 baht guided tour by electric tram available. The best time to see the ruins is mornings when it’s a little cooler and before the busses arrive. Maps are free at the ticket office. Open from 06:00 to 18:00.

The old city site has seen much restoration since the 1960s. It is well-maintained, exceptionally clean, and well furnished with vendors, and only a few touts. The heavy restoration is worth noting, since with some ruins and Buddha figures it can lead to a feeling that it is a little over-sanitised, especially in the central zone. The other zones are much less “restored” and trips down unmarked tracks can lead to ruins in their untouched state. 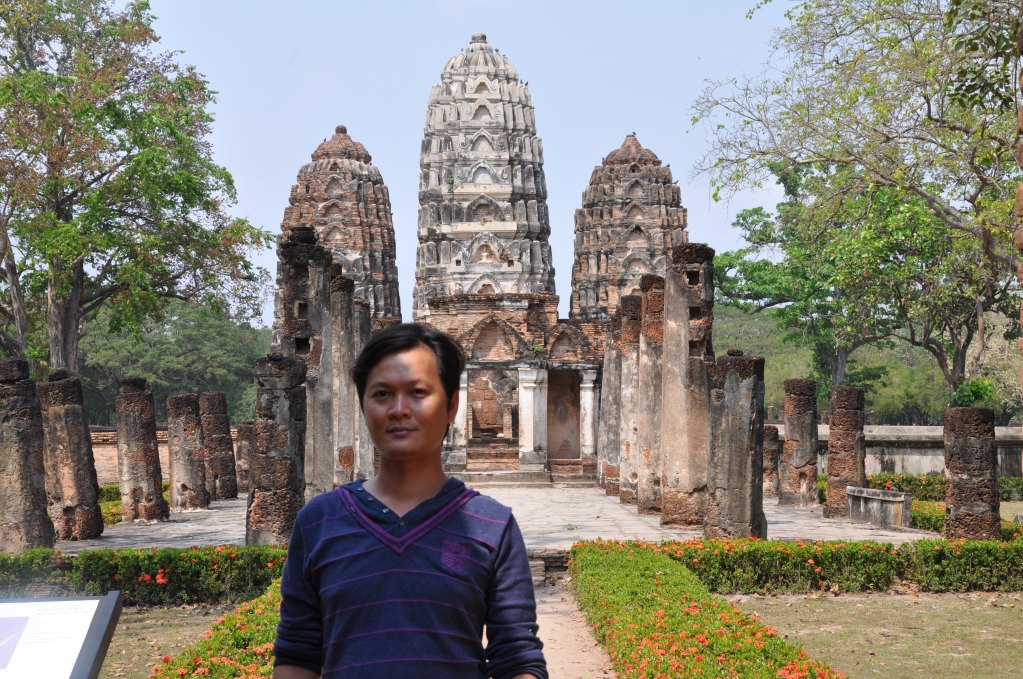 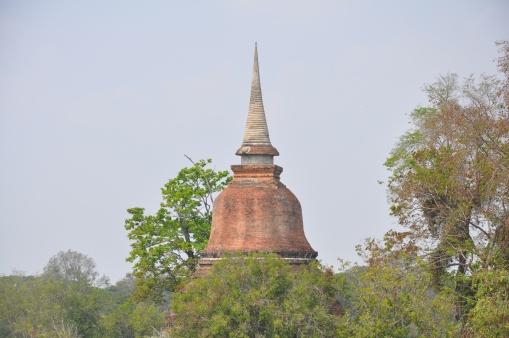 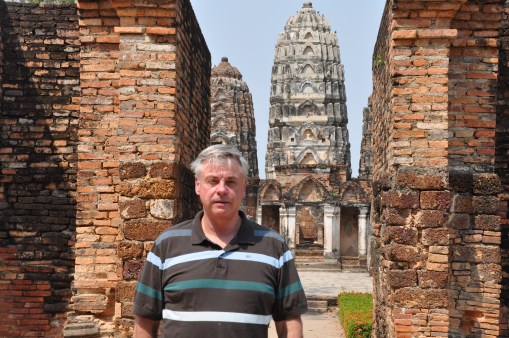 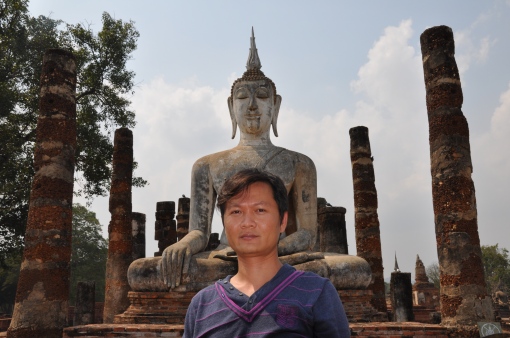 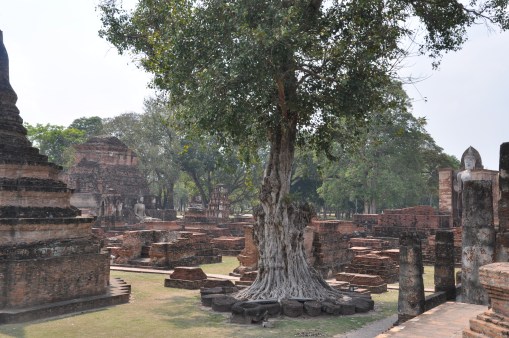 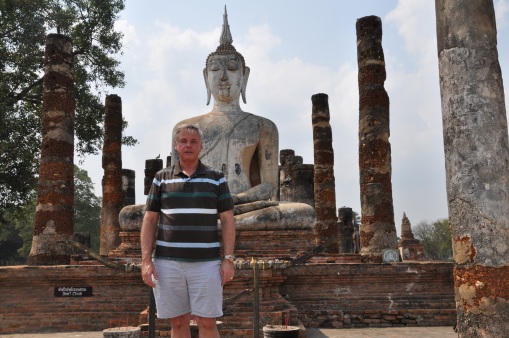 The site covers an area of approximately 70 square kilometres (~27 square miles) and is divided into multiple zones. Every zone, of course, has an entrance fee. The central zone contains the majority of the ruins and a museum. 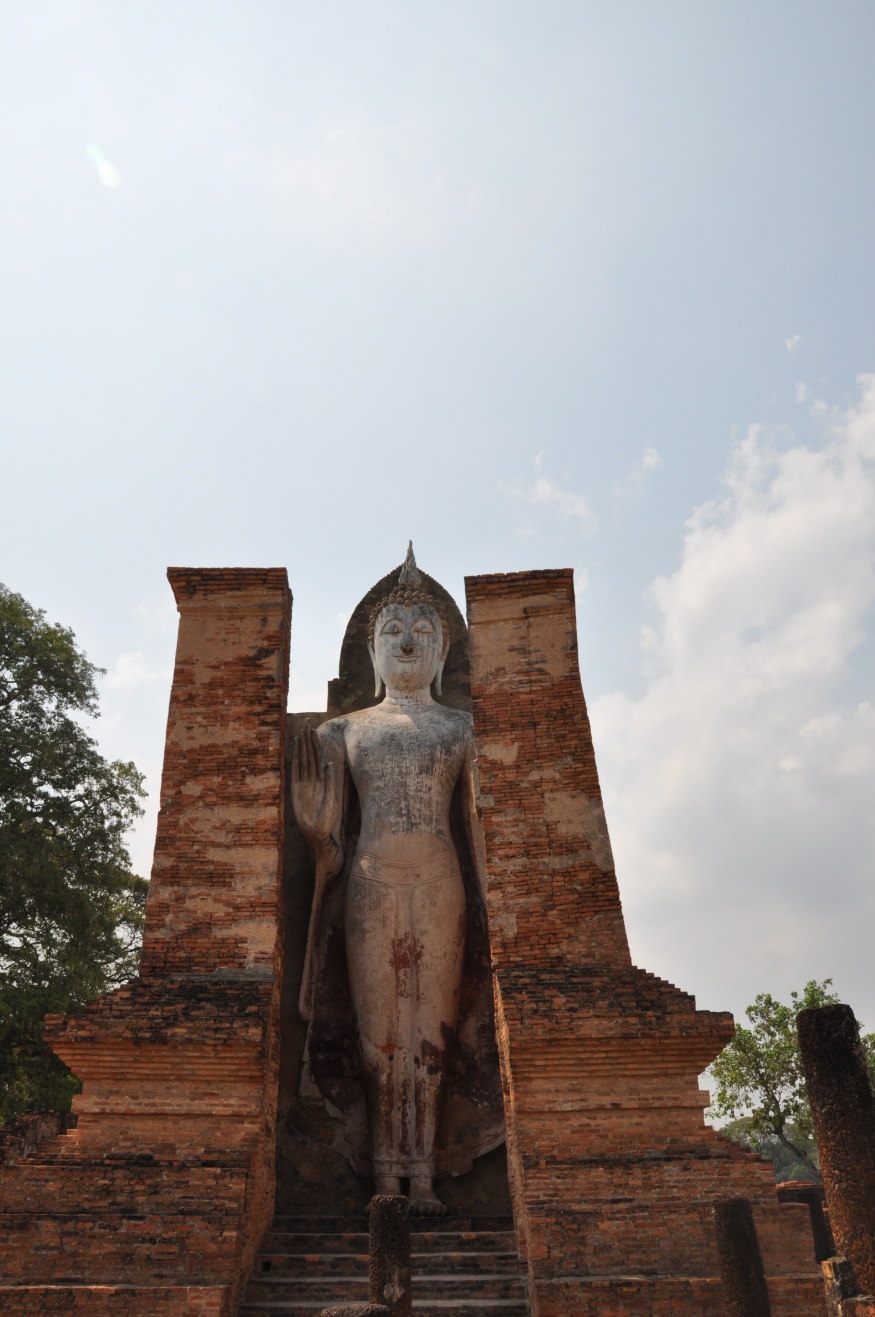 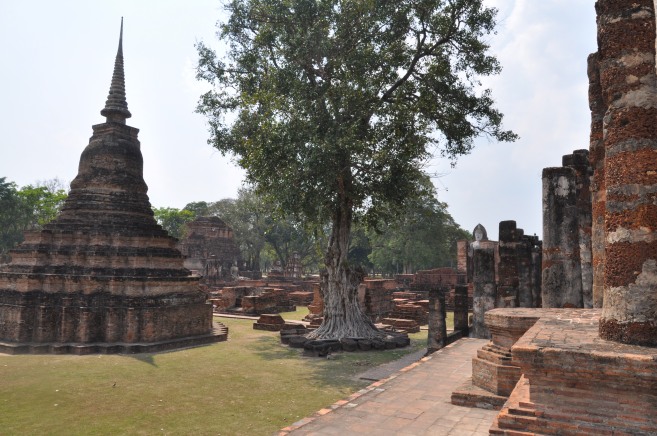 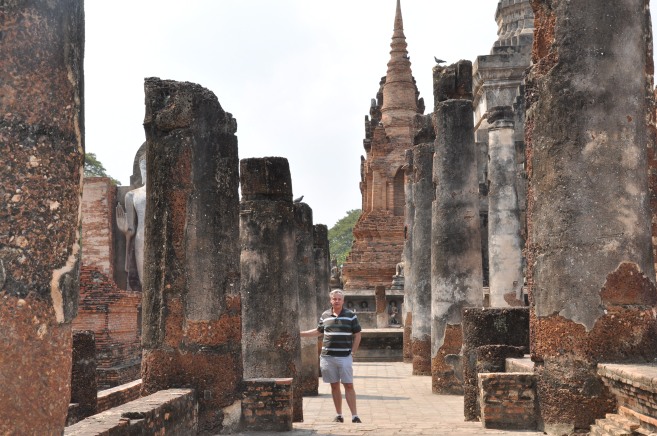 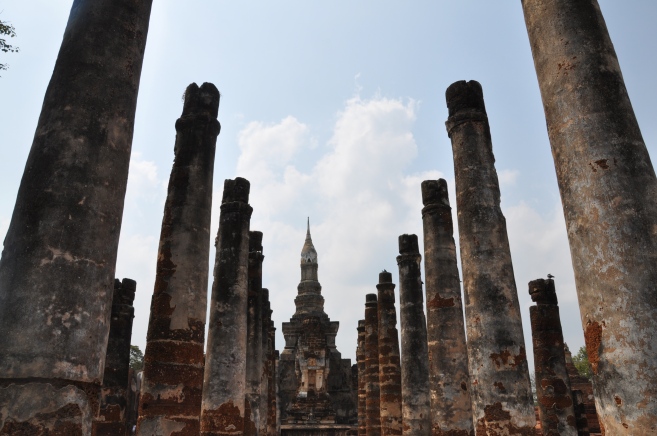 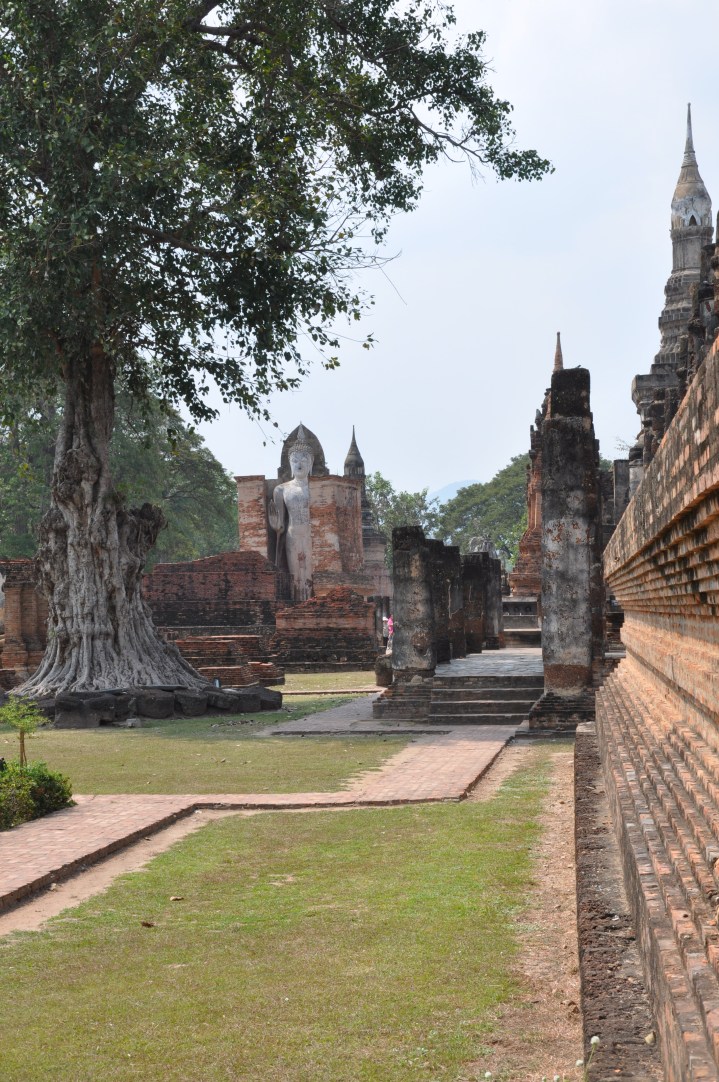 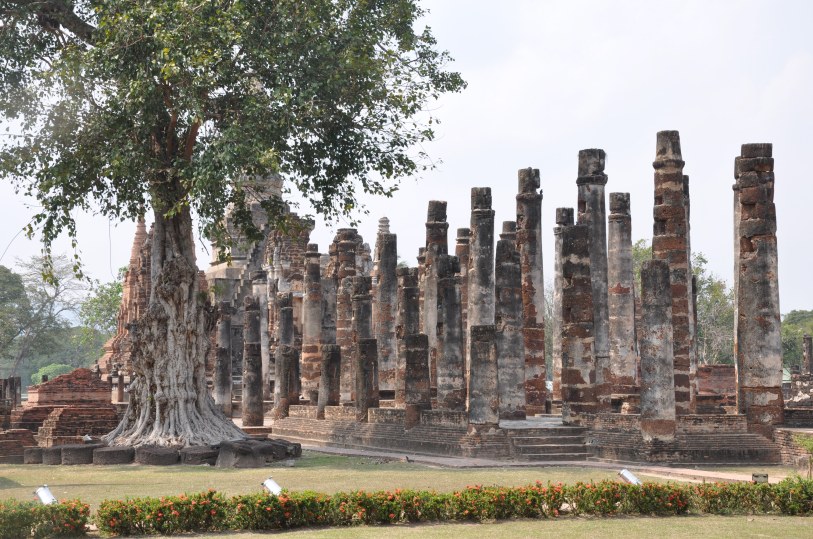 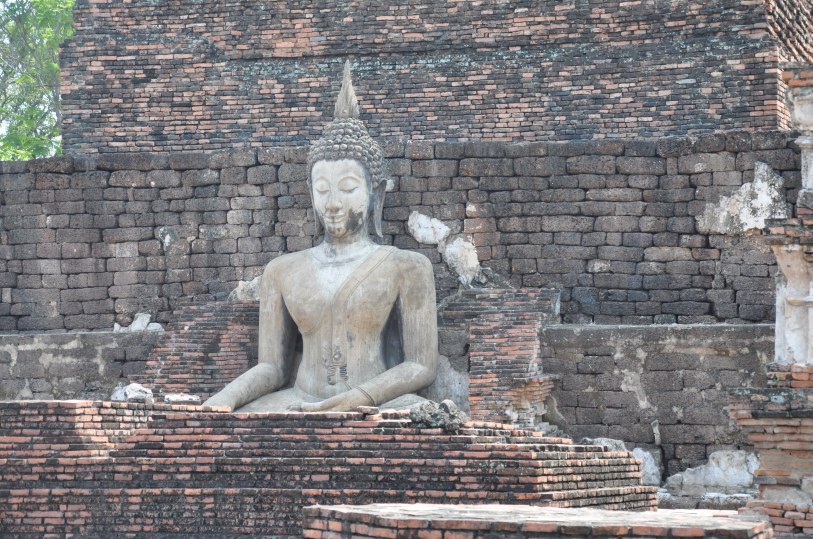 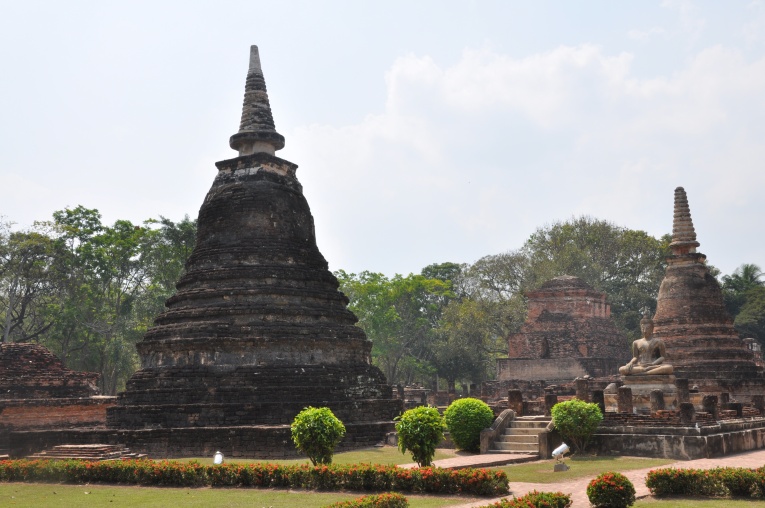 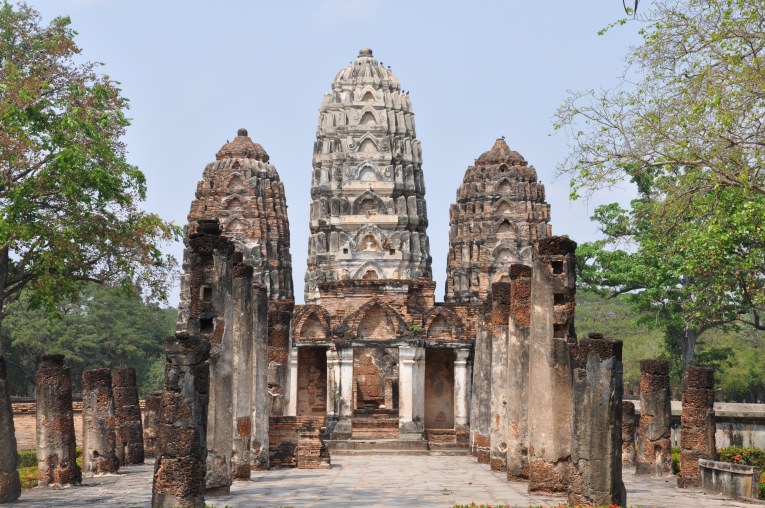 Central zone contains 11 ruins in 3 square kilometres, interspersed with moats, lakes and bridges to some island-bound ruins. Wat Mahathat is one of the most spectacular, with a large seated Buddha figure set amongst the pillars of a now ruined sala, and a central chedi flanked by two standing Buddha figures. 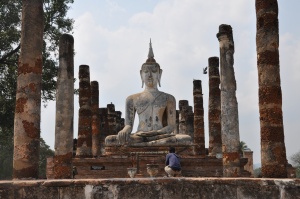 Wat Sra Sri also has a large chedi and Buddha figure, but is reached by a bridge to the island. There are some nice views from the other side of the lake. 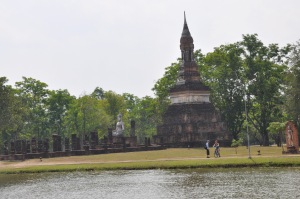 North zone – Wat Phra Phai Luang contains the remains of a number of buildings plus a large prang with stucco reliefs. More impressive is Wat Sri Chum, which contains a massive seated Buddha figure peering through an opening in its enclosure. Look for a stairway on the left as you enter the enclosure; it leads up and behind the Buddha image, though the passage is not always open.