It was another fascinating journey for me to have a career with Sydney Airport. Having spent some previous time involved with the airport, during the 2000 Sydney Olympics preparation and delivery phase, I was somewhat familiar with the people and environment. I was looking forward to being part of this airport community.

This period in my career life was probably the most complex and the busiest of all my roles. The pace of events and changes were so rapid and unrelenting I soon learned the art of multitasking and prioritizing in order to manage day-to-day. I had to improve the art of delegation to my efficient and effective teams to achieve the expectations. So how best to share a story about nearly 13 years of a life dedicated to this airport and all the hard work, time and effort that was involved?  I think the words “working with a great team and collaboration” sums up how it all transpired.

The airport initially was part of a Government business enterprise when I first joined the company, but it moved through the process of being corporatised and then onto privatization during my tenure.  These activities while a good learning experience all complicated and added to the intensive workload of the airport. 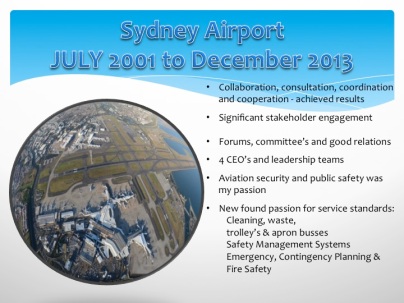 Being offered a role as Manager Airport Security in July 2001 was an exciting change from my past in Government service.  It was something that I was keen to try out – surely the private sector was not as bureaucratic – not really.

My new responsibility was to ensure aviation security was risk managed, appropriate and compliant with the extensive Government regulatory requirements and that security systems, contracts, infrastructure and costs were efficiently managed.

I felt confident in my ability due to my previous experiences but shortly after commencing work at the airport the major terrorist events of 11 September 2001 occurred and the aviation security environment and threat profile both in Australia and internationally changed significantly, as did the role of the Manager Airport Security.

The intervening years were filled with drama, media focus and ever-changing government requirements along with heavy business pressures to reduce operating costs and to be more efficient.

Owing to new airport management and focus, in December 2012, I was appointed the Head of Services Standards taking on a much broader role with continued responsibilities for aviation security and new responsibilities for safety management systems, emergency & contingency planning and aviation service support contracts such as cleaning, waste, trolleys and air-side busing.  Wow this was going to be busy and some of these areas were all new to me – but I was up for a challenge.

I had always placed a heavy reliance on my professional leadership approach and to achieve outcomes my focus was on service quality and integrity and I continued this focus in my broader role. I had a larger team, new contractors to meet and new standards to maintain – the pace of life just got more intense.

During my tenure, I was a significant participant in the Australian Governments National Aviation Security Committee and provided industry leadership to a significant number of Government Security Policy working groups.  Trips to Canberra or to other airports for meetings and working groups was something that occurred on a routine basis.  There was considerable collaboration in this industry which was fantastic.

I have set out a little later some of the initiatives that I participated in both at the Government policy level and in operational implementation and management.  In 2003 I received the Australian Security Industry Award for Excellence in Aviation Security having previously received the “Outstanding AVSEC Official Merit Award” in 2000 at the 5th ASIA Pacific Security Conference in Singapore for my contribution to aviation security.

My membership of the American Society of Industrial Security and the Australian Institute of Management ensured i maintained awareness of contemporary views of security and management.