After an exciting and interesting time as a Police Dog handler with lots of community policing, incidents, case investigations and great bonds with my working dog it was time for a new focus in my policing career. My parents at this point were getting on in years so I requested a posting to Toronto to be nearer to them for support. I thought it the right thing to do as their only child.

But how to get the family there  Another journey ensued that involved a family road trip from British Columbia south to California and across the USA and back up to Toronto.  After this epic journey, we arrived and took up our new residence. You can check out a little information on this challenging adventure with 3 small children camping across America en route to Toronto on my “life and adventure” pages.

I was transferred to the Toronto Drug squad as a team leader and upon arrival was met with a rather cold shoulder by my small team.  Ahead of my posting to Toronto Drug squad I had to attend a drug investigations techniques course at the Canadian Police College in Ottawa in the spring of April 1977 for 2 weeks developing my knowledge and skills in relations to drug investigations. It turned out that 2 of the team had applied for the role but I had been chosen for the leadership position instead of them – due to being transferred as a Corporal to Toronto.

They had missed out on a promotion.  After some heart to heart talk with them about this not being my choice, but the forces, to pick me it would be best to get along and support each other.  I recognised that their experience in the drug unit was more than mine and suggest that if we worked together with our different strengths then life would be much more enjoyable – for all of us.  Things changed for the good after that and we got along as a team. 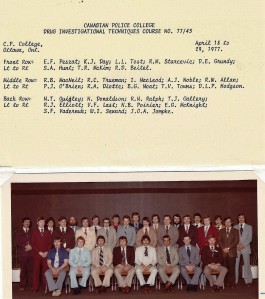 I did spend a short 6 months as a drug squad team leader at the division headquarters. During this time we worked with undercover operatives to do surveillance on drug dealers, undertake arrests of street dealers and facilitate prosecutions in the courts.  There were lots of surveillance and drug raids conducted during this time.  It was a fascinating aspect of policing filled with intrigue and mysterious activities.  It lent itself to frequenting bars and some of the seedier parts of Toronto.

The work was involved with taking statements, surveillance on drug dealers and buys by undercover officers followed by the arrest of suspects either at the time or later.  Sometimes we simply provided back up for undercover drug operations in an effort to progress investigations to try to locate those up the chain in the drug syndicates. Informants were also used to get information and these people required management. Day shifts often involved court appearances while night shifts were out on the streets.

It was not going to work out doing this type of job with 3 small children, my ex-wife working shift work at a hospital and my aging parents needing some care. I sought a role that would suit my situation.

My last 6 years in the Force was spent at Toronto Airport as a manager in the airport policing and security unit. This as it turned out, provided me with the background and knowledge to secure me a role in Australia when I left the force.  But more on that aspect in other pages. I took the role at the airport because it better suited the family life at the time and other demands of family life.

I took on the role as administrator of the airport security detachment.  Once again I was told that I had big shoes to fill and that it would be easy for me to step up as the replacement officer. Another new boy on the block scenario – one I had experienced many times before.  Another challenge was it? So I took it on to show them that this new boy could be better than the old one.  It was a busy time; it was in the era when you had support to do your job and I had a secretary that could take shorthand.  I had never experienced such niceties and really didn’t know how to give dictation – she was a wiz at taking it.

Through some instructions from my secretary, I quickly got used to saving up a number of memo’s to write and then give them to her verbally.  She would take down my ramblings in this funny language and the next day would produce back to me these lovely written memos for signature.  We worked great as a team over our time together and accomplished so much.  In later years I often thought about how productive I was with the support of such dictations skills in a secretary. Sadly as time moved on there were no more secretaries in my working life and only me to think up, write-up and deliver the correspondence that was needed. 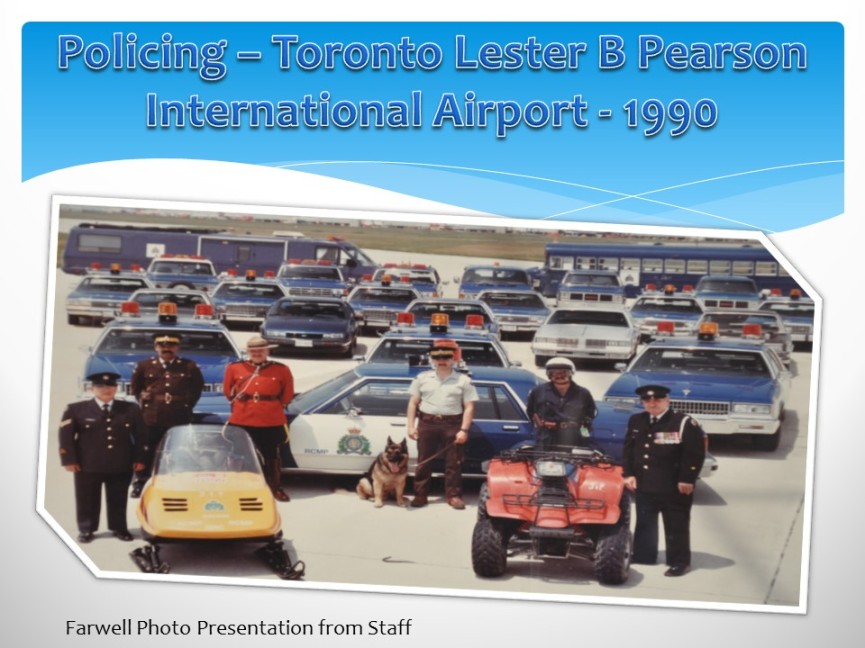 The role was great exposure and learning experience for me to move from the more practical aspects of Policing and into administration, logistics, and management. It exposed me to deal with the airport operator, Transport Canada, at the time.  The airport security manager, his team and others that run a busy airport became close associates and my involvement in airport security planning and implementation took on greater significance. I got to liaise with airline security managers that also provided valuable background for my future roles in Australia. I also worked closely with senior managers and got on very well with them – another learning exposure for me.  I was visited by a couple of these work associates when living in Australia and still keep in touch with one today – my friend Tom P.

Not only was I involved in the detachment administration and logistics for over 100 officers, I was involved in aspects of operational strategy, planning and delivery.  These would serve me well in years to come – little did I know at the time. It had been a busy 6 years at the airport, a time that was both fun and learning environment from policing to administration.  This time had seen my children grow as well and the day shift arrangement allowed for a much more balanced family life with weekends for family activities and kids sport.

When I retired in 1990 after six years at the airport it was with a tinge of sadness as well as excitement.  I left the Force with so many memories of my friends, associates, policing exploits and the locations I had served. I had achieved my goal of being better than the person before me at the airport – not that it was important but just to prove I could fill his boots.

A farewell event was held at one of the airport hotel restaurants where speeches and presentations were abundant. I recall the roasting I received including a lovely cartoon caricature of me in the office that depicted my often boisterous and forceful approach to my role – it was a classic. I receive many letters of reference and testimonials from my managers in the RCMP, the airport and airlines which I was most proud of.  I felt that I had contributed and made a difference.

Now it was onto a new life in a new country – another adventure and next phase of my wanderings.