After a journey to Thailand we took a side trip to check out the famous Angkor Wat temples and historic area.  We had just come from Koh Samui in Thailand where I had picked up a virus infection that was making travel most difficult.

We had a lovely quest house and arranged a guide to help us explore and to explain the temples.  He became most frustrated with my slow pace and need for frequent stops to recover from the walking – I was so sick but didn’t want to miss this.  It later turned out on return to Sydney I had a strain of virus similar to glandular fever and took some time to recover properly.

Angkor, in Cambodia’s northern province of Siem Reap, is one of the most important archaeological sites of Southeast Asia. It extends over approximately 400 square kilometres and consists of scores of temples, hydraulic structures (basins, dykes, reservoirs, canals) as well as communication routes. 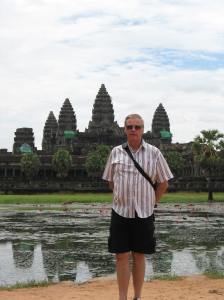 For several centuries Angkor, was the centre of the Khmer Kingdom. With impressive monuments, several different ancient urban plans and large water reservoirs, the site is a unique concentration of features testifying to an exceptional civilization.

Temples such as Angkor Wat, the Bayon, Preah Khan and Ta Prohm, exemplars of Khmer architecture, are closely linked to their geographical context as well as being imbued with symbolic significance. The architecture and layout of the successive capitals bear witness to a high level of social order and ranking within the Khmer Empire.

The park is inhabited, and many villages, some of whom the ancestors are dating back to the Angkor period are scattered throughout the park. The population practices agriculture and more specifically rice cultivation.

The area is certainly worth a visit.