A short drive takes you to this attraction in Mae Rim area north of the city.  The Tiger Kingdom is another example of the combination of tourism with wildlife preservation. The proceeds from tourist visits to the Tiger Kingdom are mainly directed to investments in captive breeding of tigers according to the operator of the facility.  There are some ethical issues about this facility and visiting, but those are personal choices. 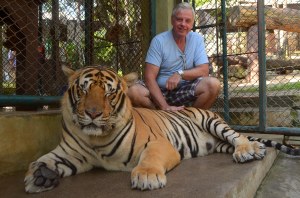 The tiger population in Thailand has been decreasing and it’s estimated that only around 120 tigers still inhabit the wild. Specialists argue that it’s just a matter of time before tigers are completely extinguished from the wild. As human population grows, areas in which tigers can live freely diminish. Tiger-human contact becomes inevitable and, as a threat to, for example, pastoral communities, tigers are commonly hunted down and killed.

The Tiger Kingdom, according to its website, aims to increase the tiger population through captive breeding. These tigers, however, are not prepared to inhabit the wild and therefore, are destined to remain in captivity from birth to death, which, given the current situation, it’s understood to be better than no tigers at all.  Since the tigers have been born in captivity and fed a special diet of milk and chicken, they tend to be less aggressive than tigers in the wild. Captive tigers can, apparently be visited more safely by tourists, who pay a considerable amount of money to spend around 10-15 minutes with them.

The proceeds from tourism allows Tiger Kingdom to increase the tiger population through captive breeding, as well as improve the overall living conditions of the tigers through the acquisition of larger areas for them to roam around. Currently, the Tiger Kingdom has over 100 tigers and if you visit you can interact with many of them. The adults are impressive and somewhat daunting to be with however the smaller cubs are typical and cute.

It’s up to you if it is worth a visit.  We enjoyed our time there.