It was the land of the midnight sun as I fondly remember summer days of 24 hour light with children playing outdoors at 2 and 3 in the morning as if it was daytime.  The winters saw a shadow of darkness for most of the day with only the hint of sunrise for a few hours.

This place was northern NWT’s regional hub and a busy town that was engineered in the late 1950s as the territory’s first “planned” community. It was a vibrant mix of Inuvialuit, Gwich’in and non-Native residents, all gathered on the boreal flats along the easternmost channel of the Mackenzie Delta. It did have an air of a wildness outpost with frontier elements in its makeup – a wild and woolly west atmosphere with wooden sidewalks and dirt roads.

There’s was visitor industry that lured some tourists with hotels, restaurants and a variety of tour providers. Access is by air or via the stunning Dempster Highway. In winter, ice roads radiate to Tuktoyaktuk and Aklavik.  This is a major city in the north with a main airport and supply point for northern exploration. Due to the nature of the weather and bitterly cold winters, one of my memories is of driving on frozen vehicle tires. When you first drove off after unplugging the engine heater the tires were frozen flat and until they warmed up and became round there was a massive thumping as you drove. This feeling and noise stuck in my consciousness.

I was married here and our first son, Jason was born here. (check out my Canadian life page). Our first apartment was in a large building that had paper-thin walls. Drunken loud neighbors and music was a regular affair. We eventually secured rented townhouse accommodation that was fairly modern. I had a lovely German Shepard that I was raising and teaching as a potential police dog recruit.  I had applied for the PDS section and was awaiting a training opening.

It was a way of life never to be experienced anywhere else. It provided memories forever. 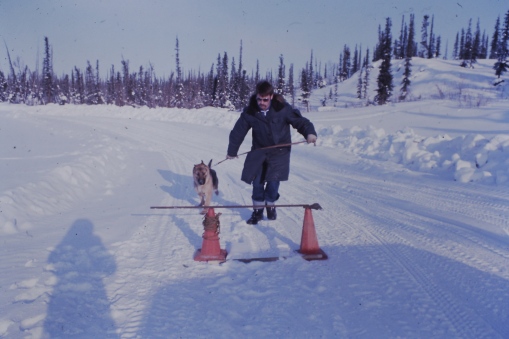 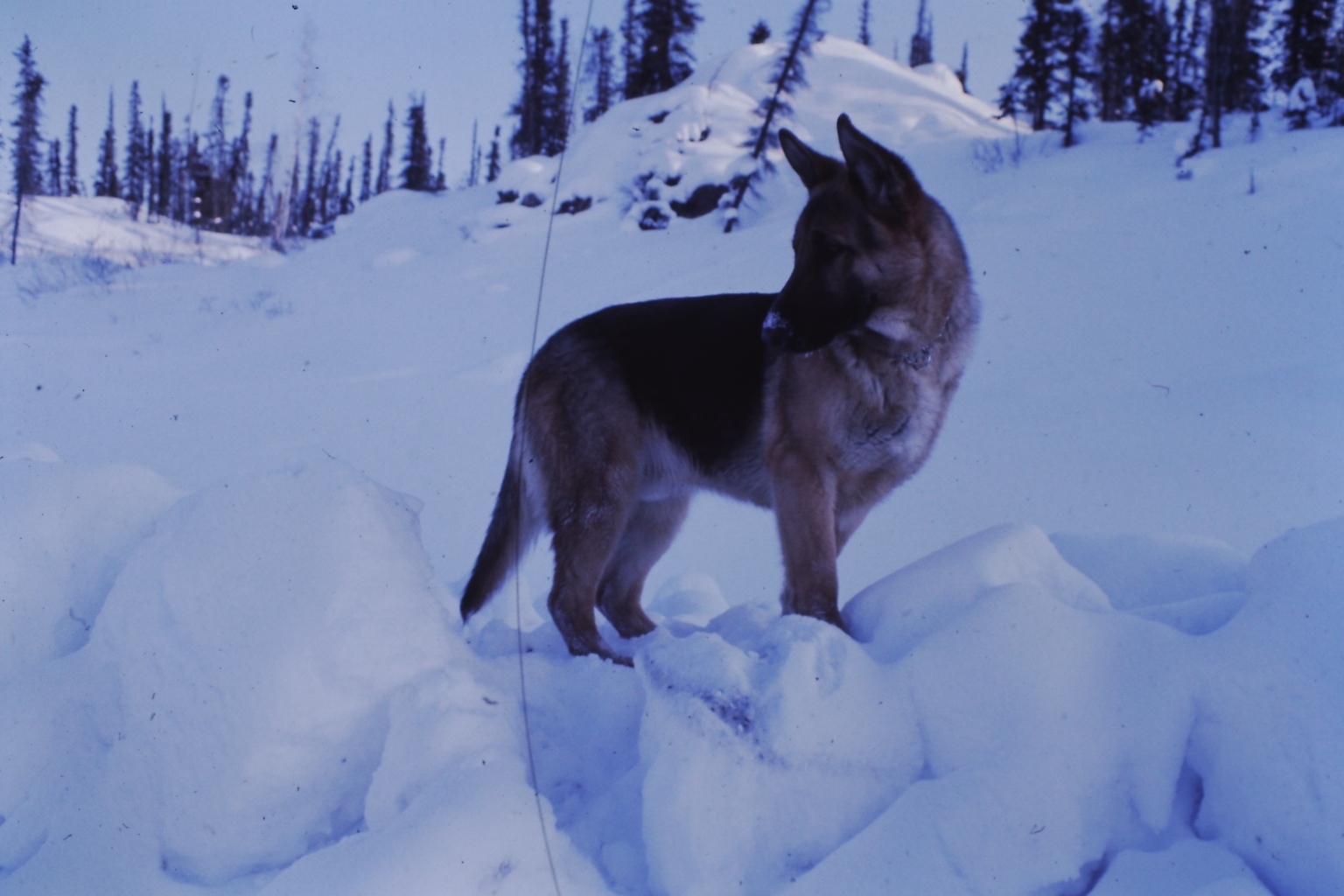 Policing in Inuvik was mainly dealing with alcohol-fueled violence and crime.

Drink driving was routine as was general drunkenness and rowdy behavior.

The clients in the main were local natives and transient workers who came to town for time off and too much fun.

Regular calls to local drinking holes to break up fights, deal with assaults, domestic violence, suicides and the regular break and enter, theft and damage to property occupied our time.

I can recall many a story of the actions that occurred from our Police office that was situated in a large compound close to the center of town. 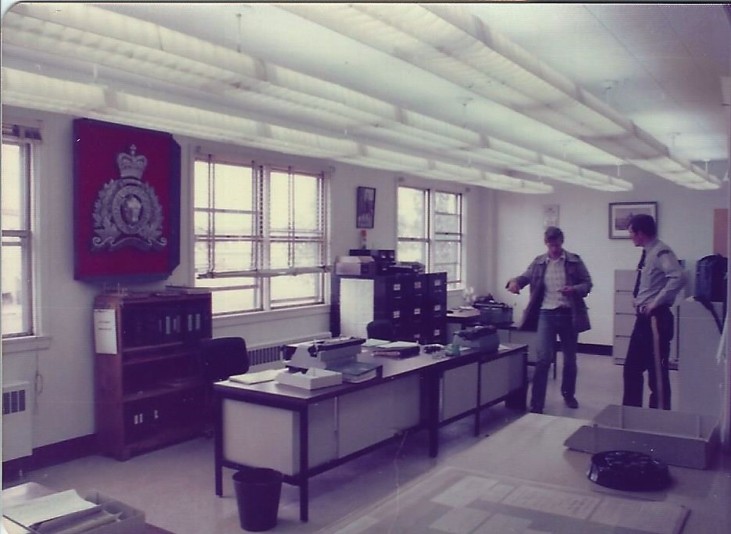 The bar at night was always good for action and a response to deal with fights and drunks. Unfortunately, the local community had its share of family disputes and during the winter months there seemed an increase in depression from the isolation and darkness that caused suicides.

The Police office like most buildings in the permafrost areas in the north was built above ground so the holding cells and processing was up a very steep set of stairs.  This often proved challenging for those that had lost their leg action due to intoxication or for those many individuals who just didn’t want to cooperate.  Getting large and heavy either drunken or unwilling humans upstairs often required ingenious methods.  I was happy that there were at least a number of officer’s on duty and you were never by yourself.

Attending a family dispute one night, among so many, stands out due to the circumstances.  Upon arriving at the house that was rather dilapidated and certainly not well-kept we were confronted with a husband and wife who had been fighting.  The husband was unconscious on the floor and had been stabbed. She explained when asked that her husband had come home drunk and during the fight, she had hit him in the face with a very large metal skillet that had knocked him out.  The knife in him could not be explained?  It took about 4 of us to deal with this women, to get her into the police truck and up those bloody stairs at the police station,

It was a bigger and more impersonal place and not like the community policing of the smaller settlements.

Farther north there were the river delta settlements of Aklavik and Tuktoyaktuk and bearing sea outpost of Sachs Harbour which were my luck to visit. All unique, with friendly locals but very isolated.

Sachs Harbour – Ikaahuk – “Place to which you cross”

Our northernmost community, this tiny Inuvialuit settlement is the only outpost on Banks Island, Canada’s fifth largest. The island is home to more than half the world’s muskoxen, plus Aulavik National Park, the epic Thomsen River, bird sanctuaries, the famed HMS Investigator shipwreck, and, possibly, a few “pizzlies” – hybrid polar bear/Grizzlies like the one that was identified here in 2006. Access is by air from Inuvik.

Our biggest town above the treeline, “Tuk” juts boldly into the Arctic Ocean. Over the years it has served as a base for Inuvialuit caribou and beluga hunting, a DEW Line radar site, and a center of oil and gas exploration. Today it welcomes visitors, who tour the nearby “pingo” hills, sample traditional foods (like muktuk!), and, of course, cool their heels in the chilly sea. Access is by air and winter road, though soon, an all-weather highway will open to Inuvik.

This town rests on the western flank of the Mackenzie Delta, near to the Richardson Mountains. Once the region’s administrative center, locals were slated to be moved to Inuvik, but refused – hence their motto, “Never say die.” Don’t miss the grave of the Mad Trapper, the mysterious backwoods killer who led Mounties on one of Canada’s greatest manhunt. Access is remote by air or water or, in winter, via the ice road from Inuvik.

Thanks to Spectacular Northwest Territories for helping me recall the locations and experiences from my time in the North and for providing some information for my site. For more on the fabulous North West Territories please check out this: http://v5.spectacularnwt.com/

To follow me to my next posting duty in the Police Dog Service follow the menu above.