So its been another week of living Tranquil in Chiang Mai, Thailand so I thought maybe a post on the week that was might help me get into the habit of routine articles, even if I didn’t have any specific event or journey to feature. Funny how the week can go by so easily and quick – even though not fully employed.  How did we ever manage before when working full-time. There are always a few personal things to keep you busy and these intermixed with my consular role see a full, but usually fairly relaxed, lifestyle.

The weather this week has been really nice. Sunny and blue skies but summer is coming and although the nights and mornings are still very pleasant (low 20’s) the days are heating up – often getting to 35 degrees.  So working around the garden and walking the dog are usually early in the morning and after sunset tasks.  From about noon onwards it gets too hot to do many things outdoors and usually means indoor activities or out in an air-conditioned car or facility. Here are a few of this weeks living activities:

Gardening jobs – a change of plantings were needed next to the back of the house sala.  We had initially planted fan palms that after about 2.5 years had grown large, covering our lounge room windows and were crowding the yard.  So out with shovel and pruners to cut them back and dig them up.  These suckers have lots of sharp thorns so gloves and caution were employed.  Lots of root systems created over the past few years so a challenge to get out.  The new plantings look much better, will not grow tall and will allow light into the are and a more open feeling. Also needed to fix some walkway steps, the garden was encroaching so needed to move a few and fix the grass. 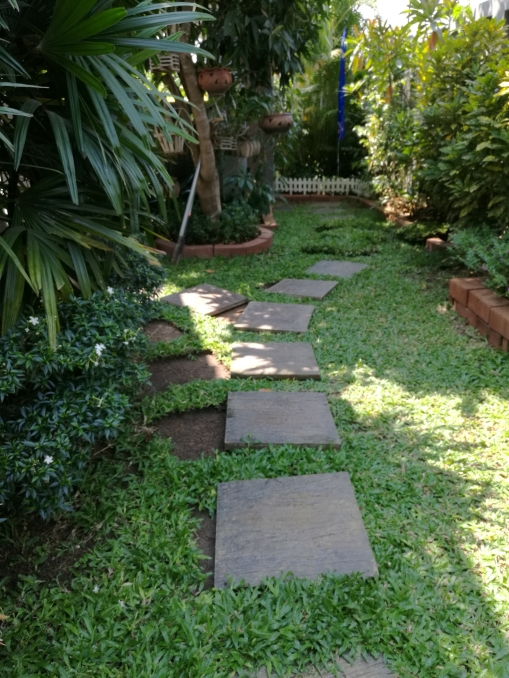 Tine to realign the path

Picture framing – I had time now to get my new certificates of appointment framed so it was off to a great frame shop we use in the city to pick out what might look good.  We managed to drop them off on Monday and pick up them up on Wednesday.  They look very official and a nice addition to my study/office and only about $25 for 3 of them professionally mounted.

New washing machine – After years of great service our Fisher Pykel clothes washing machine wasn’t working anymore and after trying to contact the dealer here we had dealt with before we found it was closed.  The company in Bangkok did say we could ship it to them and wait 4 months to see if it could be fixed – no thanks. Time to find a new machine so a few days were spent researching and exploring various electrical goods stores to source our new helper.  We finally settled on a front loader (never had one before) manufactured by Siemens. We are so far very happy with this very quiet and efficient washer – hopefully for many more years like the last one.

Morning routines, lunch out – Being in retreat from the 9-5 grind allows for a casual morning routine that normally involves getting up when one wakes up, taking Lex the dog for a walk, cleaning and tidying up around the house, some garden chores and now dealing with some phone calls and emails about Consular work.  Then it is usually heading out for a meal at lunch. There are so many options for food in Chiang Mai it can be either a new adventure or visit to one of our regular or favourite spots. We pretty much visited a few of our normal spots this week at Kad Farang food court, Scent of Coffee near the Royal garden, Isaan food spot on the garden road and a specialty chicken & rice place in the old city.

Usually a coffee and treat in the afternoon before an evening walk with Lex the dog is order.

Event souvenir – I had asked the recent Chiang Mai World Fair 17 event organiser for a copy of the video that was made of the entertainment over the weekend.  I had promised the Aussie band a video of their performance.  We arranged a pick up of the video on Friday in exchange for an Australian/Thailand Flag pin at their offices in Nimmanhaemin area.  A great souvenir of the wonderful event – check out the post on the CMWF17.

Air force base passes – living and driving around Chiang Mai is always an adventure and often a challenge. The airport is in the city and getting around it can often mean driving out of your way to get places. We found out last year that anyone could apply for vehicle passes that allows you to travel through the airforce base that is connected to the International airport thus making certain driving destinations easier.  It was time to pick up the passes for our two cars this week – an effortless journey onto the base to the administration centre to retrieve them.  They were free with a minor donation of about $10.  They are good for a year now and we can start the application process all over again in December.

Expat club breakfast – hadn’t been in a while so on Friday I headed into town in the morning to meet club members at the Rivermarket restaurant.  The usual large buffet style breakfast will all the food you could want was on offer for $10.  I managed to have a chat with a few Aussies including Ric, an 80 something year old author of many Australian books.  He tells me he will have 3 published this year, the first being in April. Also had a chat with a few of the Board members and I was asked to be a stand-by to help out at meeting receptions should they be short of volunteers.

Plumber & Electricians – we had a few repairs needed in terms of faulty fan, 2 lights that needed replacing and a bathroom shower that was not functioning correctly.  We have managed to find a good electrician that works on houses in our development so he came around to fix things  Of course we needed some parts so a trip to a lights and fan supplier was needed before he could fix things.  We managed to track down the fan controller and purchased 2 replacement lights for outdoors.  Ace did some investigation and tracked down the Chiang Mai distributor of a rain shower assembly we had purchased a few years ago – imported from Italy.  It wasn’t functioning properly but after a technician visited and worked some magic it seems to all be functioning like new again.

Hope all remains quiet and we can stay close to home and check out a few movies, try out some of this months free True vision platinum package, do some reading and other laid back things. Have some ice hockey to experience – not seen many games for a number of years.

Its nice be home on weekend and then go out during the week while everyone is at work – quieter.  A more relaxing weekend is now in order after our Friday night official function (see the Aus Consul Blog page) outing.  So there you have the week that was.